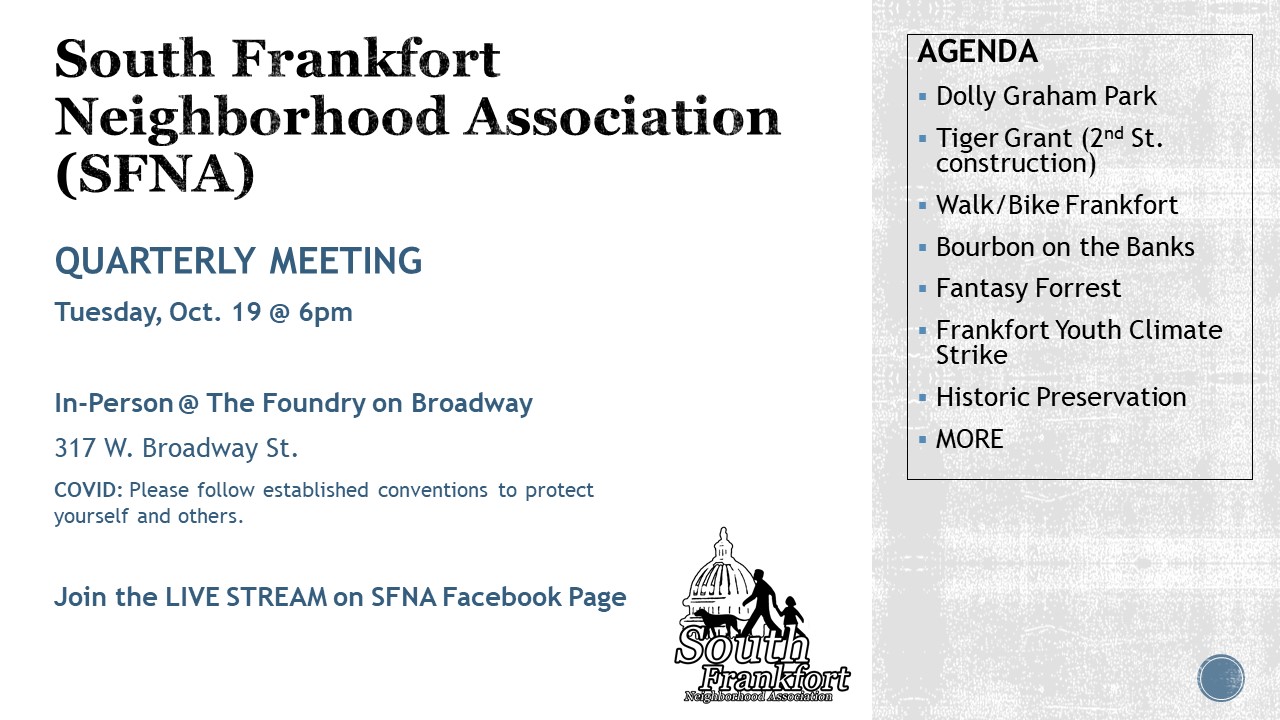 Our next SFNA meeting will be online only.

Our City Commission Candidate forum for April 9th has been canceled.

We are sorry and understand how frustrating this is, but community health is important, and we want to follow all of the CDC guidelines, as well as those of Governor Beshear and CHFS/DPH.

We hope to reschedule for an October event, exact date TBD. Thank you for your understanding.

check out this great resource from the Health Dept:

FRANKFORT – The Frankfort Plant Board is set to work on Todd Street beginning Monday, March 9, 2020. The Electric Department will begin replacing utility poles on the block between Shelby and Logan between 8 a.m. and 3 p.m. The project is estimated to take three to four weeks. We apologize for any inconvenience this may cause.

Join us for our first quarterly meeting of 2020!

Eddie Fowler with the South Frankfort Community Garden is also on the agenda!

We’ll be using the generously donated space at The Foundry, so if you’ve not been to this new spot, now is a great chance to check it out!

Candidates and elected officials are welcome to attend, but campaigning and distribution of any campaign or promotional literature is prohibited

LINEUP/CHECK-IN:
• Lineup is first come, first serve from 4:30 p.m. – 5:30 p.m. on Clinton Street behind the old state office building. Must be Pre-Registered
• Parade entries will check-in on Holmes Street at Regan Street. No public vehicles will be admitted.
• Public parking is available in old state office building parking lot (entrance at corner of Holmes/Mero).
ROUTE:  Parade will step off onto High Street to Main to Capital Avenue and end at the Capitol building.
• Entries will disband at West State Street toward Shelby Street. Vehicles may return downtown via the Singing Bridge (MAX 3 ton limit) and floats/large trucks may use Taylor Avenue.

This year Passport Radio and the Commonwealth are teaming up together to bring back a loved and missed tradition! We will be joining forces with the Annual Frankfort Christmas Parade; we will be ending the parade with the lighting of the Governor’s Christmas Tree. The parade will step-off at 6 p.m. The route will be High Street to Main to Capital Avenue; where it will at the Capitol Circle. The tree lighting will immediately follow the parade.

Governor Bevin and Governor Elect Beshear will both be in attendance to light the tree.

Come light up the night and usher in the holiday season on the front steps of the Kentucky State Capitol with a timeless Kentucky Christmas tradition: the Governor’s Christmas Tree Lighting!

Enjoy complimentary hot chocolate and cookies provided by the Kentucky Department of Parks.

Following the tree lighting ceremony, everyone is invited to walk over to the Governor’s Mansion to see the beautiful holiday decorations and meet Santa Claus!

All City and all County offices are closed

All CCU Frankfort branches will be closed, for example. Check with other banks and businesses before traveling — call, check websites & facebook.

PET OWNERS NOTE: Additionally, we’d like South Frankfort residents to be aware that the parade will be kicking off at 10AM with a cannon shot from the Capitol Overlook.  We thank everyone for their patience during this event, further questions should be directed to the City.

This year, all of the inaugural events are free to the public, with an RSVP.  Full information on that can be found at kentucky.gov/Inauguration.